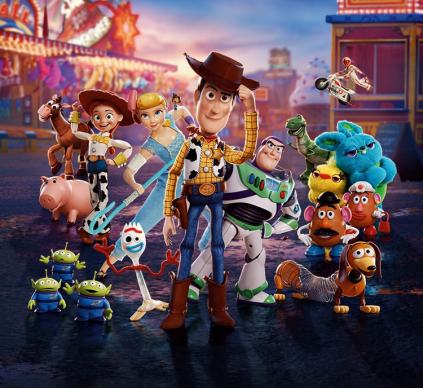 Toy Story 3 ended with Andy passing on all his toys to a young Bonnie as he left to go to college. Toy Story 4 finds the toys are still with Bonnie (Madeleine McGraw) though Woody (Tom Hanks) is struggling to accept that Bonnie may have now outgrown him.

When Bonnie makes a new toy out of a spork called Forky (Tony Hale), Woody takes it upon himself to protect her new favourite toy though he soon discovers that is easier said than done.

When the family head off on a road trip, Forky manages to escape out of the back so Woody goes after him and they end up being held in an antique store by a defunct doll called Gabby Gabby (Christina Hendricks). When Woody escapes and bumps into Bo Peep (Annie Potts) he enlists her and her friends Giggle McDimples (Ally Maki) and Duke Caboom (Keanu Reeves), all toys without children, to help him save Forky.

He is joined along the way by Buzz (Tim Allen) and carnival toys Ducky (Keegan Michael-Key) and Bunny (Jordan Peele). As the mission becomes dangerous the toys have to decide what lengths they will go to make a child happy and whether that matches with what makes them happy.

Screenwriters Andrew Stanton and Stephany Folsom along with director Josh Cooley have done a great job of taking the tried and tested formula of the previous films and making it feel fresh, funny and meaningful.

Toy Story 4 is a departure from the first 3 films focusing more on the newer toys though ultimately this is Woody’s story and how he deals with finding his place in the world now that Bonnie no longer needs him.

Whilst it is great to see Hanks, Allen and Potts reprise their roles of Woody, Buzz and Bo, Toy Story 4 also has some great new characters with Forky and Duke Caboom stealing the show thanks to the vocal performances of Hale and Reeves whilst Ducky and Bunny provide many of the films funniest moments.

Visually Toy Story 4 is stunning with the gorgeous rich colours of the carnival grounds, the intricate details of the antique store and the more polished and developed designs of the toys showing how far Pixar have come since the first Toy Story film was released in 1995.

Toy Story 4 is a must see film for fans even those that felt that Toy Story 3 was a good way to end the franchise. It is full of heart, emotion, fantastic animation and plenty of laughs along the way!