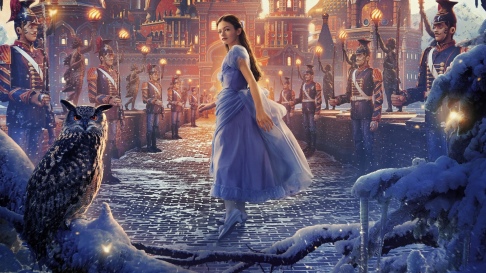 The film follows Clara Stahlbaum (Mackenzie Foy), the middle child of an aristocratic family in Victorian era London. Clara feels the odd one out in her family, as she doesn’t share the same interests as her older sister Louise (Ellie Bamber) and her younger brother Fritz (Tom Sweet). The family are also coming to terms with the death of their mother, Marie (Anna Madeley), and Clara finds herself disagreeing with her father (Matthew Macfadyen) as to how they both deal with it.

Whilst attending a Christmas Eve party at the home of Clara’s godfather, the inventor Drosselmeyer (Morgan Freeman), Clara follows a path laid out by both her mother and Drosselmeyer which leads her to the Four Realms.

Both Lasse Hallstrom and Joe Johnston share directing credit due to Hallstrom being unavailable for the reshoots but the film doesn’t suffer from this and it all comes together in a story that pays tribute to the original tale whilst adding a new spin on how it portrays Clara and other characters of the Four Realms.

In Hoffman’s story, Marie, is the main character but here she is reimagined as the mother of Clara and portrayed as an inventor as talented as Drosselmeyer. This allows Clara to be portrayed with the same talent as her mother giving Disney the ability to make the female lead more modern.

Foy’s portrayal of Clara is both appealing and engaging and the audience will relate to the character’s need to do the right thing and make her mother proud.

The film is visually compelling with gorgeous costumes, sets and designs and the audience are treated half way through the film to the wonderful Misty Copeland as the gifted ballerina in the Four Realms.

The Nutcracker and the Four Realms is a fun adventure which takes the main character on an empowering journey as she discovers herself and rediscovers the meaning of family!