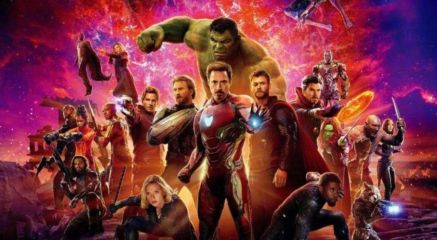 In order to stop Thanos (Josh Brolin) from killing half the universe, all the heroes must work together to prevent him from finding the remaining Infinity Stones which will complete his Infinity Gauntlet.

But will the might of all the Avengers be enough to defeat Thanos?

Screenwriters Christopher Markus and Stephen McFeely are given the difficult task of balancing so many characters whilst developing Thanos beyond his brief appearances in previous films and by in large they achieve their remit.

With a cast this size it was always going to be hard to keep track of them all but the directors weave back and forth between plot threads and set pieces so we are never with any of the characters for too long.

Splitting the heroes into unlikely teams works really well with bickering, bonding and much-needed laughs, though never distracting the audience from the danger they all face.

Thanos is a compelling & interesting villain and almost sympathetic at times with his absolute determination and commitment to achieve his goal. Marvel have gained a reputation of not achieving fully developed villians but if the last two films are anything to go by they are now on the right track.

With so many characters on screen, Avengers: Infinity War does rely on the character development achieved in previous films for the emotional arcs in the story, underlying the fact this really is a film made for the fans.

But it is the final act and the post-credit scene which really makes this film leaving the audience in shock as a chill and a darkness sweeps across the screen raising the stakes for next time.

The Russo brothers have delivered on their promise of bringing the film franchise together to defeat Thanos whilst staying true to the characters that have made the Marvel Cinematic Universe (MCU) so popular.

Thankfully, along with Markus and McFeely they will be back next year with Avengers 4 to bring the first three phases of the MCU to completion!