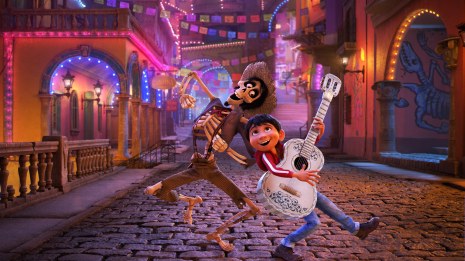 Coco is an American 3D computer-animated musical fantasy film produced by Pixar Animation Studios and released by Walt Disney Pictures. The story is based on an original idea by director Lee Unkrich who teams up again with Toy Story 3 producer Darla K. Anderson.

The story follows 12 year old Miguel (Anthony Gonzalez) who comes from a family of shoemakers but dreams of being a musician and following in the footsteps of the greatest musician who had ever lived, Ernesto de la Cruz (Benjamin Bratt).

Unfortunately for Miguel his family’s long term ban on music, which has been passed down through generations, means he must hide his ambitions. Miguel’s great great grandfather was a musician who had abandoned his family to follow his dreams, leaving Mama Imelda (Alanna Ubach) to raise Miguel’s great grandmother Mama Coco (Ana Ofelia Murguia) on her own.

When Miguel’s family discover he has been teaching himself to play guitar and his idol is Ernesto de la Cruz they forbid him from pursuing his dreams. Miguel determined to be a musician steals Ernesto’s guitar on Dia de los Muertos and accidentally transports himself to the Land of the Dead.

There he meets his deceased ancestors who also disapprove of his love of music so he tries to find Ernesto with the help of likeable con man Hector (Gael Garcia Bernal) who needs Miguel to help him visit the Land of the Living. Racing against the clock Miguel must find a way to get home before the sun rises, which marks the end of Dia de los Muertos, or else he’ll be trapped in the Land of the Dead forever.

The story of Coco is a typical coming of age tale with Miguel embarking on an adventure and learning an important lesson about himself and his family which everyone will be able to relate to. Miguel’s journey is the emotional arc of the film but there are also plenty of twists and turns along the way to keep the story fresh.

Visually Coco is stunning with the backdrop of the Land of the Dead full of vibrant colours. The world is beautifully animated with various neighbourhoods, skeletons and neon-coloured spirit guides which are brought to life by the animators at Pixar. The Land of the Living is equally impressive.

With Miguel’s family being so large Coco mainly focuses on Miguel and his great great grandparents so they receive the most character development. Even so the story does provide small details of other family members which gives them some characterisation and depth.

Michael Giacchino is the film’s composer giving Coco a number of catchy and fun songs which are an integral part of the film though this is not a musical in the same vein as Disney’s typical animated films.

Coco is a fantastic film with visuals that raise the animation bar and a story that is full of heart, emotion and rich in Mexican culture. Some elements of the film are a bit dark for very young children but Coco has the makings of being another Pixar classic which will entertain all fans!