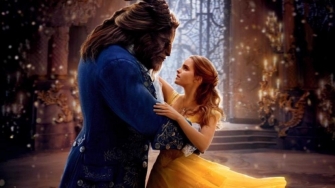 Beauty and the Beast is an American musical romantic fantasy film directed by Bill Condon. The film is a live-action and computer animation remake of Disney’s 1991 animated film of the same name.

The film is set in Bourbon-era France and tells the story of a selfish prince (Dan Stevens) who is transformed into a Beast when a spell is placed upon his castle and servants by a beggar woman when he refuses to give her shelter in exchange for an enchanted rose. To break the spell the prince must learn to love another and earn her love in return before the rose’s last petal falls.

Years pass and in a small village near by a music box maker called Maurice (Kevin Kline) lives with his daughter Belle (Emma Watson). Belle is a young progressive independent woman who loves literature which makes her an outcast amongst the more traditional minded villagers.

When Maurice stumbles upon the prince’s castle and is taken prisoner Belle comes to his rescue and forces the Beast to take her prisoner instead. The Beast is downright hostile towards Belle to begin with but it’s not long before he mellows and Belle, encouraged by the castle’s staff who have been turned into inanimate objects, realises there is much more to the Beast than meets the eye.

Meanwhile, Maurice desperately pleads with the villagers to help him rescue Belle but only Gaston (Luke Evans), the village’s popular war hero, comes to his aid though unbeknown to Maurice his intentions are far from honourable.

Director Bill Condon brings the world and characters of Beauty and the Beast to life blending real world sets with digital backdrops and photo-realistic versions of the castle’s servants. Cordon and his team also succeed in making iconic musical numbers such as ‘Gaston’ and ‘Be Our Guest’ visually-engaging with the latter drawing on moments from many famous musicals.

Alan Menken once again co-writes the musical numbers and whilst they are not as memorable as the original songs they help to move the story along and provide a vehicle for the cast to show off their vocal talents. Watson and Stevens are both impressive but are naturally outshone by those with proven singing ability, Luke Evans, Josh Gad (Le Fou), Kevin Kline, Ewan McGregor (Lumiere), Emma Thompson (Mrs. Potts) and Audra McDonald (Madame de Garderobe).

Beauty and the Beast combines classic Disney romance and musical numbers (with a modern feel) along with gorgeous costumes and set designs which should please fans of the original as well as those new to the tale!