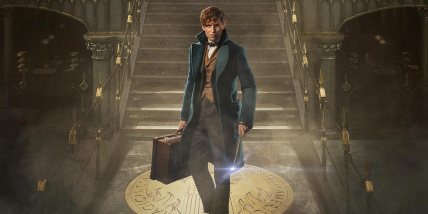 J.K. Rowling returns to the wizarding world she created in Harry Potter in her screenwriting debut inspired by her book of the same name Fantastic Beasts and Where to Find Them.

The 2001 book was written to benefit the charity Comic Relief under the pen name of the fictitious author Magizoologist Newt Scamander. In the Harry Potter universe the book is a required textbook for first-year Hogwarts students with Magizoology being the study of magical creatures.

The film introduces us to Newt (Eddie Redmayne) in 1926 when he arrives in New York City to aid a rare beast in need of his assistance. It doesn’t take long for Newt to lose his magically-expanding suitcase, containing many fantastical creatures, when he accidentally swaps suitcases with No-Maj (non-magical) Jacob Kowalski (Dan Fogler) resulting in several of the mischievous creatures escaping.

Magical creatures running amok in the city couldn’t have come at a worse time for the magical community as a conflict with wizards, fed up of living in secrecy, threatens to reveal the Wizarding World to America.

In his quest to find his suitcase Newt meets demoted Auror (a hunter of dark wizards) Tina Goldstein (Katherine Waterston) who helps him find Jacob and introduces them both to her Legilimens (magical skill of extracting feelings and memories from another person’s mind) sister, Queenie (Alison Sudol).

They along with the Director of Magical Security, Percival Graves (Colin Farrell) who is employed within the Magical Congress of the United States of America, all become embroiled in the search for a very dangerous beast. A beast which was believed to be extinct and has the capability of harming human and magical beings which in the wrong hands could break the Wizarding World from within.

Director David Yates, a veteran of the Harry Potter film series, brings us into a much darker world than seen before with themes of abuse, repression and fear. Graphic violence and death are depicted which younger Harry Potter fans if watching will find disturbing.

Eddie Redmayne is perfectly cast as the introverted Newt who is much more comfortable being around creatures then he is with humans. It is his interactions with them where the character is at its best as his enthusiasm and knowledge of the magical creatures shines through leading to some lovely scenes.

The creatures are all visually stunning and this is where the film really excels as they are brought to life on screen. My favourites were Niffler, a cross between a mole and a duck-billed platypus, Pickett, a Bowtruckle, which are made out of tree stems with their own little branches and Thunderbird, a massive bird that can create storms by flapping its wings.

The characters of Newt and Tina, though very likeable, are not given enough time to be fleshed out, in fact we are given none of Newt’s backstory, meaning the stronger personalities of Jacob and Queenie continually outshine them. The sub-plot of their attraction to each other not only provides some comic relief but develops their own characters and they end up becoming the heart of the film.

The cast also includes Samantha Morton, Ezra Miller and Jon Voight to name a few but they are all underused as the film quickly moves past their contributions.

With this the first of five films planned in the franchise the story was always going to be lightweight, as it introduces us to a group of new characters, but there is still enough to keep the viewer interested and with hints of things to come I look forward to seeing where J.K Rowling takes us next.