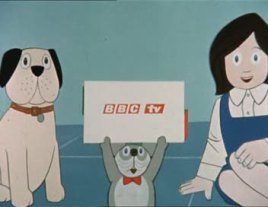 Mary, Mungo and Midge was a British animated children series, created by John Ryan, which aired on the BBC in 1969.

The show followed the adventures of a girl called Mary, her dog Mungo and her inquisitive pet mouse Midge who played the flute. They lived on the top floor of a new tower block in a busy town. The series was narrated by BBC newsreader Richard Baker who also provided the voices of Mungo and Midge with John Ryan’s daughter Isabel playing Mary.

The programme was part of the BBC’s Watch with Mother series which was aimed specifically at pre-school children watching with their mothers.

Mary, Mungo and Midge was one of the first children’s shows in the UK to reflect urban living with the characters having adventures in the town where they lived rather than a rural setting.

Each episode opened with narrator Richard Baker explaining that ‘A town is full of buildings, some tall, some short, some wide and some narrow. The buildings are flats, and houses and factories and shops. They are built in streets.’ He then described where Mary, Mungo and Midge lived in the town.

Their adventures included a visit to the clock repairer, a funfair, a hospital and a printer’s shop with Midge normally getting up to some mischief.

Every episode would see Mary, Mungo and Midge returning from their adventures with Midge sitting on Mungo’s nose so he could press the button for the lift back to their flat on the 8th floor.

This was John Ryan’s first series made for colour TV using his ‘live’ animation technique which he had developed in the late 1950’s. Flat card cut-outs were overpainted with gouache, with all movements of characters’ arms, legs, eyes and mouths manually controllable by out-of-shot levers. As colour TV had not reached every home in 1969, each colour animation had to be checked for its appearance on a black and white set.

The programme proved popular with viewers spurning merchandise that included badges, annuals and jigsaws. All 13 episodes were released on video in 1998 and on DVD in 2001.