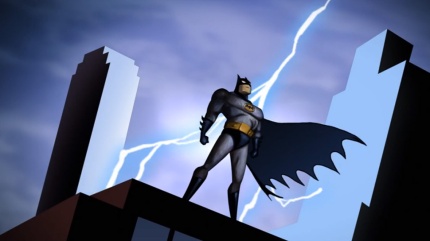 Since artist Bob Kane created Batman in 1939 for DC Comics there have been many different interpretations of the character over the years both on television and film.

Outside of the comics, Batman: The Animated Series is considered by many, myself included, as being one of the best adaptations of Batman.

The series which ran from 1992 to 1995 was created by Bruce Timm and Eric Radomski. They took influence from the Tim Burton films, Batman (1989) and Batman Returns (1992) as well as the acclaimed Superman cartoons produced by Fleischer Studios in the early 1940’s.

The gothic backgrounds and the look and feel of Gotham City were based on the artwork of Radomski who instructed the animation department that all backgrounds should be painted using light colours on black paper (instead of the industry standard of dark colours on white paper). This combination of “noir” imagery and Art Deco design was called “Dark Deco” by the producers.

The tone and style of the series made it much more adult orientated than previous superhero cartoons with physical violence depicted along with realistic firearms.

The casting by vocal director Andrea Romano is spot on with Kevin Conroy portraying Bruce Wayne and Batman. Conroy used different voices to distinguish between the two a tactic which was previously used by Michael Keaton in the Tim Burton films.

Due to the popularity of Conroy’s performance as Batman he has continued to voice the character in multiple animated films and video games with his most recent film being Batman: The Killing Joke released this year.

The series was also known for bringing in popular actors to provide the voices of various classic villains, most notably Mark Hamill (Star Wars) who had the right mix of menace and hilarity in his portrayal of The Joker.

The character of Bruce Wayne was given a welcome make-over being depicted as assertive, intelligent and actively involved in the management of Wayne Enterprises rather than the previous incarnations that showed Bruce deliberately playing up his image as a self-absorbed and not that bright playboy.

The original Robin, Dick Grayson, was given a modernised costume consisting of short sleeves and long tights along with a more serious personality to match the tone of the series.

The show created characters that became so popular with audiences that they made the cross over into the main line of DC Comics. These included the Joker’s assistant Harley Quinn, Gotham City police detective Renee Montoya and the vigilante Lock-Up.

During its 85 episode run the series won four Emmy Awards with IGN Entertainment and Wizard magazine rating it as the second greatest animated television show of all time (after The Simpsons).

The writing, acting and visuals are all top notch making this a must see for all Batman fans!

Batman: The Animated Series Volumes One to Four are available to buy on DVD.